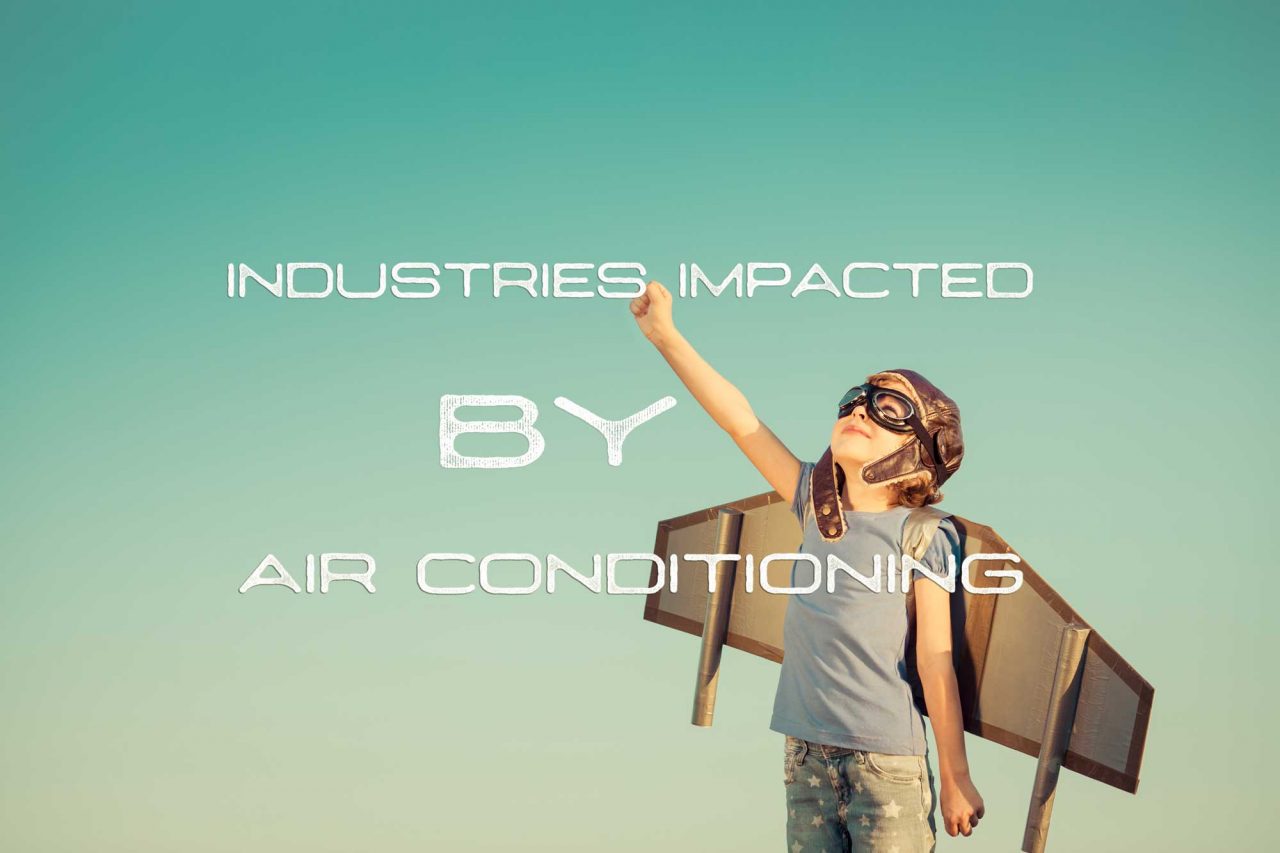 Conditioned air is not just for hot summers, it has impacted essentially every industry and keeping things cool literally keeps people alive. Below is a sampling of areas where air conditioners or thermal control is vital:

Production Industry – essentially where the most viable air conditioning that we base all modern air conditioners on today was innovated by Willis Carrier for a 4 colour press printing machine in 1902. Each primary colour was run through the press independently, if the humidity or temperature changed, the colours would not line up, and the image would look like a 3D movie without the glasses… blurry. Little did he know the profound effect he would have on the world at large.

Textile and Flour Industry – requires humidity control to throttle the likelihood of an explosion. Tool rooms too, as metal can expand and retract due to temperature variances, and for machining precision to 1000th of an inch, it is a necessity.

Farming/Groceries – not just for you, but farmers and land produce, but the sea with fisheries the whole meat industry, and by products such as milk, cheeses, chocolate. It also gets food distributed globally but especially places of famine where floods, droughts or plagues have halted the food production.

Commerce too, now that food is not staying in one’s village or country it is considered a GNP – gross national product and gets counted for what a company/country exports. National exports – a big deal in the world of trade, starting with spices and silks thousands of years ago, now that perishables can be shipped, we enjoy the cuisines of the globe and don’t have to eat cabbage and beef jerky 12 months of the year!

Transportation of people & non-food goods – imagine a stuffy non-air airplane? Busses? An automobile or taxi? You want those lithium batteries for your phone from overseas?

Chemical Industry – some chemicals that are vital for current everyday production are volatile if the temperature increases beyond its natural capacity, especially chemicals of a combustible nature, or dry ice.

Medical Industries: Hospitals, Dentists & Clinics – keeping organs cool, transplants & tissues, patient comfortability, bones which are frozen and used for transplant into other humans, whether ground up and inserted for support, such as in dentistry upon a tooth extraction to reinforce the jaw, or orthopedic surgeons sometimes use the whole bone inserted into another person instead of a metal rod. Medical equipment is also sensitive to temperature and humidity levels and requires strict ambient tolerance control to work at optimal levels.

Fitness – gyms are air conditioned; imagine being even sweatier and everyone else too in a confined space? (Think old Rocky movies).  Air Conditioners actually help with odour control, which is a main reason for use in airplanes (that they don’t tell you) as well.

Hospitality – hotels, motels, Air BnB and the like – not just guest rooms, but conference facilities, restaurants, features such as indoor mini golf or theatres, especially the front lobby.

Tourism – There is no doubt not just tropical, but consider especially as Canadians… Florida and the snowbird culture emanated from the onset of air conditioning. Sarasota, FL became the “air conditioned city” according to a song of that era, as the population doubled from 1930 to 1980 and subsequently so did travel to such destinations.

Design & Architecture – air conditioning had a significant impact, creating the HVAC industry – as heat was previously known as radiator, coal or wood, and gas fired furnaces were being installed in the 20s  – but forced air furnaces coupled with central air changed the interior of the home in terms of adding channels, stacks or bulkheads to accommodate duct work. Additionally the exteriors of homes changed, as mentioned above in Florida the front porches were no longer being utilized as they once were, and the main living became indoors. Glassed in high rise office towers & condos are a major development and would previously been inconceivable without air conditioning.

Cultural Changes – we don’t really associate the advent of AC to changes in culture… however it has changed many urban areas from people of outdoors to people of indoors. In Florida, for example, there was an extensive “front porch culture” prior to air conditioning, but since then it has become more of an indoor culture. Arizona was essentially uninhabitable until the advent of air conditioning and could anyone even imagine Las Vegas without central air?

Offices – We’ve all seen those throwback movies depicting a bygone era of the man at the desk sweating in his suit, pulling his tie away from his neck and the “secretary” (female) chewing gum and fanning herself with a file folder. We don’t have any conception of this these days as it doesn’t even enter our minds that office space wouldn’t be air conditioned.

Restaurant Industry – the ability to store meat and produce for periods longer than 2 days was pivotal in the restaurant industry. Also refrigerated trucks and trains in order to move the produce to get it to the restaurants in the first place, were elemental. This also offered the availability of exotic cuisines to be offered, such as lobster from Maine. Refrigeration and freezing was far more important than front of the house comfort, until it was economically viable (and stable enough) to establish air conditioning for patrons for the dining-in experience.

Grocery Store – Replacing the corner store, the “grocery store” we take for granted today was not always a thing. In the 1950s and prior, the majority of families had backyard gardens and “canned” vegetables and fruit such as to have such delicacies available in out of season and wintertime. One only went to the convenience store, general store or corner store to get dry or pre-canned goods, candy, shelf stable items such as baking goods, flour for baking and other non-grocery items. Refrigeration provided the availability for milk and fresh meat (not spam) to be available on demand as well as to keep produce fresh, and a new line of things such as frozen vegetables and other freezables available.

Tech – tech sector for coolant of server centers – including your bank. Emerging R&D facilities heavily rely on refrigeration, freezing and other temperature controls to conduct their experiments in a myriad of disciplines.

Nuclear Power Plants – some reactors are cooled by air as well as a myriad of other combinations, however air has increased the need for more nuclear energy – the global energy need is expected to triple by 2050.

Housing – it is estimated 87 % of North American housing has air; which has opened up previously uninhabitable places into being optimal places to live. Globally – this is not just Canada or even North America, but all around the world, especially Europe, UAE, The Middle East, Australia, Asia, the demand will be ever increasing especially as more places in Africa and India increase their standard of living to be able to include air conditioning.

Wine & Spirits Industry – Back in the day before people had ice cubes in summer (not till the mid 1850s) there was no ice bucket to cool your favourite vino or bubbly. Only the root cellars were the coolest natural place in the dwelling, and thus, is why the wine cellar is as celebrated as it is. Today, climate controlled wine fridges are so abundant, we can’t fathom the day that at one point they were not always present. Without air, there would be no fruity drinks on the beach. And could you imagine a scotch not on the rocks? Without freezers, where would vodka be stored?

Heating Ontario is a Family Owned Canadian Company! For an instant free estimate, call us at 647-591-2683 or see our locations on our contact us page.

Call us if your building isn’t listed above, we can make arrangements.

Do you have multiple workplace facilities, franchises, homes, offices or retail space?

No need to deal with multiple companies, technicians and locations – One call will solve it all at 647-591-2683